“Hi Leisa, I just wanted to let you know what an amazing time Lily had at the Hogwarts party on the weekend.  From the moment we arrived at the front gate (or in other words Platform 9 3/4) we knew we were in for something special.  We were immediately transported into the world of Hogwarts…the owls greeting us, the stacked up suitcases…and that was just outside!  Once inside, Lily and I couldn’t contain our amazement at the quality and variety of the props.  Every detail was covered..down to the labels on the pumpkin juice bottles.  For me it was the Great Hall table setting…the silver plates and goblets were beautiful..and the floating candles were just perfect.  Lily hasn’t stopped talking about the Quidditch game props…everything was handmade and authentic…the only thing they couldn’t do was fly!  Finally, the street signs looked like they had come direct from the movies…simply fantastic.  I can’t begin to thank you enough, it was honestly the most magnificent party set up we have ever seen.” Robin

“My daughter was invited to a birthday party where Party Prop Hire props were used.  Everyone had a tremendous time and my daughter still raves about it with great excitement.  The props transformed the whole house into scenes from the movie including floating candles in the Great Hall, the dogs even had Hogwarts cloaks!  Potions were realistic yet made from natural products.  Honeydukes was awesome!  Quidditch set up in the garden is unreal.  You really do feel as though you have stepped into the world of Harry Potter. Altogether a fantastic memorable afternoon that the kids will be talking about for years to come”. Tina

“Wow! What an amazing party, it was just like being at Hogwarts.  The attention to detail in the props really has to be seen to be believed.  I have never seen anything like it. My twelve year old daughter had a wonderful time and said it was the best party ever!” Deb

“Quidditch was the best fun ever! The broomsticks were excellent and very realistic” – Charlotte

“The lollies were deliciously yummy and looked like they had come straight from Honeydukes.” Larley

“We and all the birthday guests were very impressed with the beautiful props we hired from Leisa.  It really made the party feel like a Mad Hatters party.  The kids (and parents) had a great time playing flamingo croquet.  Leisa is very professional – everything turned up on time and looking exactly as described, if not better.” K Anderson 20/10/12

“Thanks so much for the wonderful Alice in Wonderland props we hired.  Everyone was so impressed by them and they really made the Mad Hatters Bridal Shower a huge success.  Thanks for making the whole process so easy”. D Carr 20/11/12

to the home of parties! A touch of magic, a dash of wishes and a splash of dreams - that's all it takes to create a memory.
Party Prop Hire Brisbane helps you create those cherished memories with the magic of our unique themed props. We transform an ordinary party into a magical environment where you might share tea with Alice in Wonderland or play Quidditch with Harry Potter. Our party props make anything seem possible.
Don't just throw a party. Create a memory that your loved ones will enjoy forever. Leisa x 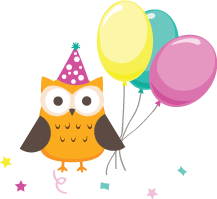